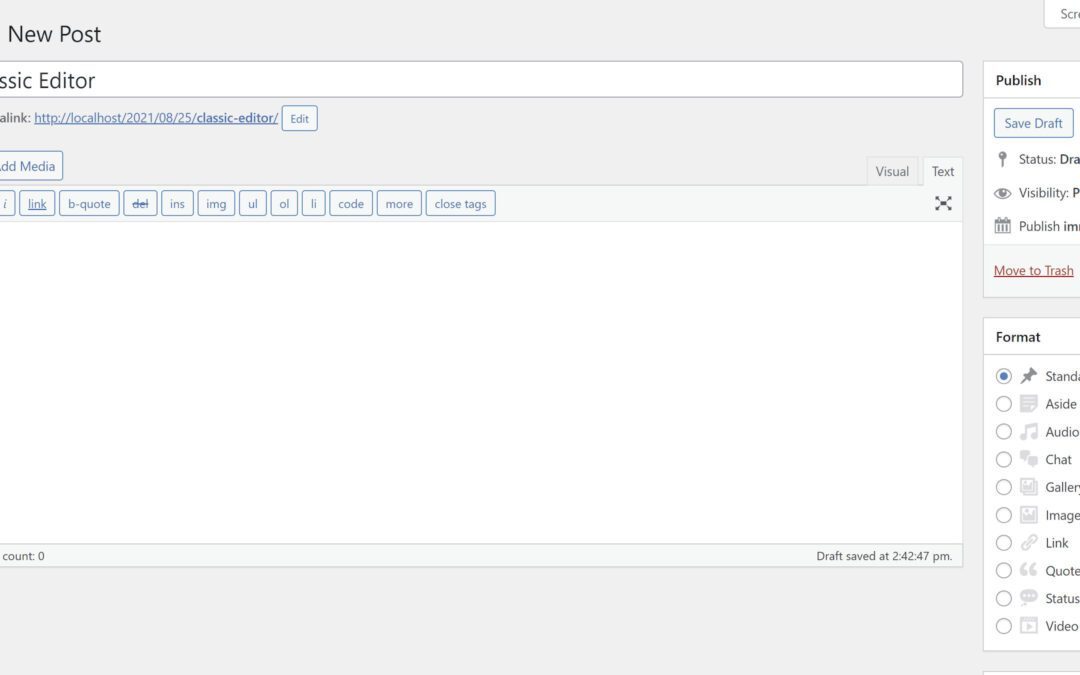 Last week, I reached out to several members of the core WordPress committers to see if we could get an official word on whether Classic Editor support would continue beyond the mere months it seemingly had left to live. I received a semi-official answer but was asked to hold off on publishing for a more detailed and nuanced response.

Earlier today, WordPress executive director Josepha Haden Chomposy announced the official decision. It was just as expected. The WordPress project would continue supporting the Classic Editor plugin for a while longer.

As of now, classic users have a one-year extension.

However, the plugin will not suddenly stop working on December 31, 2022. That is merely the current deadline for the “full support” phase. It should continue working well beyond whatever date is set for that support window to close.

Designer Mark Root-Wiley reached out to WP Tavern via Twitter last week, but others had been asking the same question for a while. For some, they needed to know if they could continue supporting specific client needs. For others, it was a bludgeon to use in conversations for all editor-related things. Whatever the reason, before today, the last word had been from a Make Core post in November 2018.

“The Classic Editor plugin will be officially supported until December 31, 2021,” wrote core contributor Gary Pendergast in that three-year-old announcement. It was a shock for many at the time, uncertain whether the new block system would meet their needs.

While three years may have seemed like plenty of time to ditch the classic in favor of the modern WordPress editor, the current stats show that the project still has a few miles yet to go.

Currently, there are over 5 million active installations of the Classic Editor plugin. I am still waiting for a more specific tally, but no one has provided an answer yet. At best, we think the counter turns over at 10+ million, so we can speculate on the floor and ceiling for possible usage.

Active installs are not the entire picture either. For example, we have the plugin installed here at the Tavern for legacy reasons but do not use it in our day-to-day work. We can likely disable it altogether. WordPress has no telemetry system for tracking the usage of such features. While the install total will not always make the picture clear, the current number supports the push for continued maintenance.

“I think it’s important to note that the plugin is not going anywhere,” said core committer Jonathan Desrosiers. “It will continue to be listed on the .ORG repository for the foreseeable future.”

He pointed out that understanding the next phase of the Classic Editor plugin meant looking into the level of effort required to support it since 2018. The overwhelming majority of the changes in that nearly three-year timeframe have come down to keeping up with:

“It’s been almost three whole years, and the plugin has largely required very little maintenance to continue functioning, and the bulk of maintenance has been to limit warnings and notices in debug logs,” he said.

The goal of the Classic Editor plugin was to help ease the transition to the block editor. Thus far, there have been eight major WordPress releases since the switch in version 5.0.

“There’s a theory called the diffusion of innovations that looks to explain how, why, and at what rate new technology spreads,” said Desrosiers. “It separates adopters into several groups based on when they are willing to take the jump: innovators, early adopters, early majority, late majority, and laggards. I truly think that we have seen a good portion of the late majority beginning to move towards using the block editor. This can also be confirmed by the plugin’s install growth, which has been slowing and plateauing this year.”

He had expected the previous deadline to mark the next stage of the Classic Editor plugin, called the “sunset” phase. It would be a time when the WordPress project moved from full support to encouraging late adopters to transition to the current editor to get the plugin’s numbers down.

“The context I gave previously shows that, until now, that the level of effort needed to keep the plugin working on newer versions of WP has been pretty minimal,” said Desrosiers of the potential sunset phase. “I expect that pattern to continue thanks to backward compatibility. If any security issues or major problems are encountered, they’ll, of course, be fixed. Any incompatibilities with the plugin and newer versions of WP will be considered on a case by case basis, but little to no time will be put towards bug fixes.”

However, this sunset phase will have to wait. We will not see it until at least the current support window closes on December 31, 2022. WordPress project leaders will need to reevaluate the plugin’s lifespan at that point.

The other looming question would be whether core WordPress would move specific pieces of its system to the Classic Editor plugin, such as allowing custom post types to support the old editor or the meta box API.

“There are no plans at this time to move any of the underlying ‘classic’ parts from core to the plugin,” said Desrosiers. “I’m sure that removing these parts will be evaluated at some point in the future, but when that will be is not clear.”

Even when official Classic Editor support reaches a hard deadline, it does not mean such a traditional editing experience will cease to exist. Plugins like Disable Gutenberg have promised longer lifespans than the initial support window, and other editor projects will undoubtedly arise if there is wide enough demand.

“The block editor has come a long way, and I encourage everyone that has not yet given it a second chance (late adopters) to do so,” said Desrosiers. “You may be pleasantly surprised.”