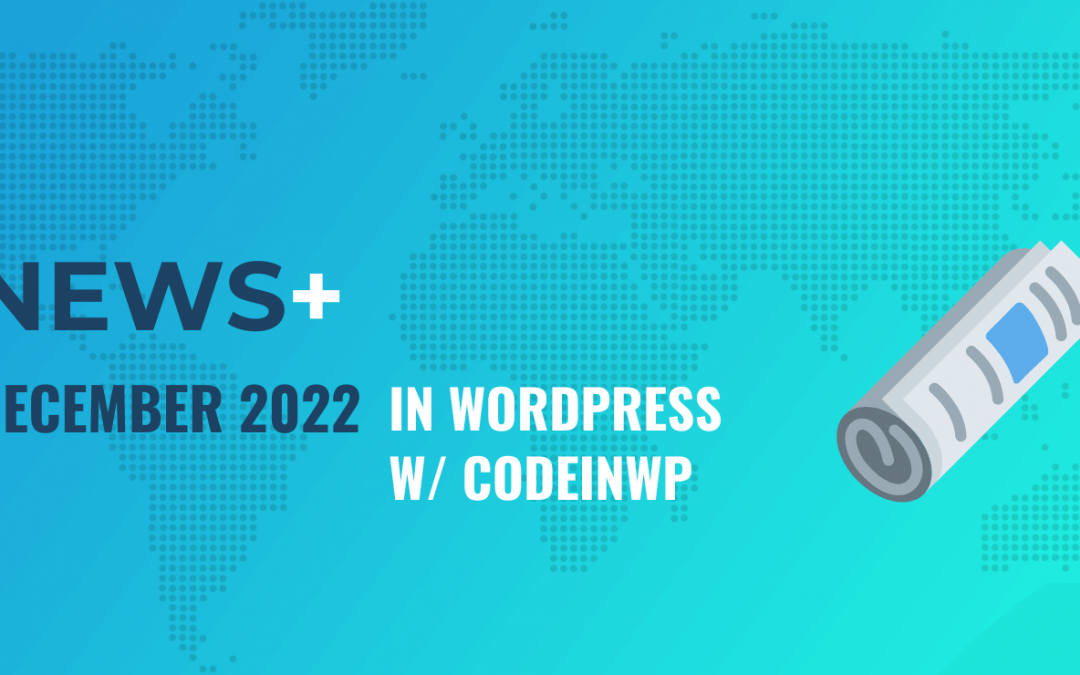 📆  This is the December 2022 edition of “This Month in WordPress with CodeinWP.”

Hey, WordPress fans. We are checking in with our latest roundup of WordPress news from the past month.

November was a bit of a slow month in terms of WordPress news, perhaps because the US WordPress community was more focused on stuffing themselves with turkey 🦃 than working on WordPress sites. But despite that, there were still a few tasty tidbits that are worth sharing.

There was a new major WordPress release (6.1), details on State of the Word 2022, a rebrand of the Full Site Editing concept, big changes to Jetpack Search pricing, and a few other pieces worth sharing.

Let’s get to all of the WordPress news from the past month:

The biggest news of the month happened on the very first day when WordPress 6.1 “Mischa” was released to the public.

WordPress 6.1 brought a number of new features and improvements to WordPress.

Most notably, it marked the arrival of a new default WordPress theme – Twenty Twenty-Three. As you’d expect, Twenty Twenty-Three focuses on using the new block-based approach to site building, with a number of patterns and style variations.

Beyond the new default theme, WordPress 6.1 also brought tons of improvements and enhancements to the Full Site Editing experience in the block editor (which – spoiler alert – will no longer be called Full Site Editing).

Here’s a quick run-down of the biggest additions:

You can see all of the performance-focused changes in the Performance Field Guide.

And to explore all of the nitty-gritty changes in WordPress 6.1, you can explore the full WordPress 6.1 Field Guide.

State of the Word 2022 will be streamed live in December

Instead, it will be a separate event in December.

The speech will take place in front of a live audience, but it will also be livestreamed via the WordPress YouTube channel, so anyone can watch it.

There is one change from last year, though.

In 2021, people were able to attend on an invite-only basis. But for 2022, you can request an invitation to attend if you’d like to go in person. The seats are available on a first-come, first-served basis, so don’t wait too long if you want to attend.

Beyond attending, you can also participate by submitting a question for the Q&A portion of the event.

Because so many people will be livestreaming the event versus attending in person, you’re allowed to submit your questions via email – just send them to ask-matt@wordcamp.org.

Or, you’ll also be able to ask questions in the livestream chat on YouTube.

One of the biggest additions is the new High Performance Order Storage (HPOS) feature, which has finally made it into the WooCommerce plugin.

We’ve mentioned this feature a few times in our past news posts, but the basic idea is that it optimizes how WooCommerce stores its data in the WordPress database.

Because it’s a big change, this feature is still disabled by default. If you don’t enable it, nothing will change with your store (and I don’t recommend enabling it on existing live stores).

If you’re interested in exploring this new feature, WooCommerce has published several posts about it:

Beyond the new HPOS feature, WooCommerce 7.1 also brings some other enhancements:

To learn more, check out the official WooCommerce 7.1 release post. Or, WP Tavern also has a post on the release.

Of all the atomized Jetpack services, Jetpack Search had always been one of the most intriguing.

If you’re not familiar with this service, it replaces the native WordPress search function with an Elasticsearch-powered search instance on Automattic’s servers.

Not only does this mean that it reduces the load on your site’s servers, but it also creates a more user-friendly, accurate search experience.

However, at least personally, I never was able to use Jetpack Search on my sites because the pricing model was prohibitively expensive.

You can find an explanation for the pricing changes here.

Beyond the changes, Jetpack Search also added a three-month free trial so that you can figure out your site’s actual search usage before potentially committing to a paid plan.

The previous pricing plans were based exclusively on the number of search records you had, with all plans supporting unlimited search requests.

This new pricing model is a lot more affordable for use cases where you have a lot of records, but not a lot of search volume.

Soflyy is ditching lifetime licenses for WP All Import and Oxygen

For those selling WordPress products, the choice between offering lifetime licenses and one-year licenses has always been a tough one.

Over time, we’ve seen a definite shift away from the lifetime model and more toward the yearly subscription model.

In November, we saw another big name make the shift, with Soflyy ditching lifetime licenses for new customers for WP All Import and Oxygen.

What’s most interesting about the announcement posts, though, is that they still say that lifetime licenses can work. They just recognize that moving to a subscription approach will make them more money.

Here are the links to the announcement posts – WP All Import and Oxygen.

Soflyy had already ditched the lifetime license for its new Breakdance website builder project, so the writing was already on the wall when it came to the other lifetime products.

Personally, I think the yearly approach will soon become a necessity. Even if it’s possible to create profitable products using the lifetime model, it’s going to be tough to compete against other WordPress companies who are able to build a bigger war chest with dependable recurring revenue.

If another company can build more features, quality test better, and offer better support because of the subscription revenue, it’s easy for the lifetime company to lose out, even if it’s cheaper.

In a previous WordPress news post, we talked about the debate over what to name the experience of customizing your WordPress site’s templates with blocks.

Originally, this concept was known as Full Site Editing, or FSE for short.

However, after a period of debate, Full Site Editing is now no more.

Instead, this functionality will now be known as the Site Editor.

There seem to have been two main factors driving the name change, according to this WordPress.org post:

You still might see the term Full Site Editing used here and there. But going forward, it will be called the Site Editor in official WordPress communication and releases.

Can WordPress replace Twitter for the WordPress community? OpenPress as a concept

The most common name seems to be Mastodon, but Mike McAlister threw a different name into the mix – WordPress.

More specifically, Mike discussed the concept of something called OpenPress.

This is not a real plugin (yet, at least) – it’s just an interesting thought experiment/concept from Mike.

The basic idea is that you could install the OpenPress plugin to run your own microblogging site powered by your own WordPress install. That would mean you’d be in full control over all of the content that you publish.

But then, to make it more than just a microblogging plugin, OpenPress would also let you connect your site to other sites running the OpenPress plugin to create more of a network feel.

The idea is that you could create a more optimized Twitter-like community for WordPress users, with more of a focus on self-ownership and privacy.

Again, none of this exists yet, but it’s an interesting idea. If you want to learn more, see some mockups, and participate in the discussion, you can check out Mike’s post here.

Or, if you’re interested in something that does exist and gets you kind of close to the idea of OpenPress, you can check out Alex Kirk’s Friends plugin.

WordCamp Asia, the first-ever major WordCamp event in Asia, just released its first round of speakers for 2023.

The event was originally supposed to debut in 2020…but we all know what happened there.

If you want to check out the lineup, you can see the release post here

And if you’re interested in attending, WordCamp Asia 2023 will be held in Bangkok, Thailand from February 17-19.

That sums up our December 2022 WordPress news roundup. Anything we missed?

Don’t forget to join our crash course on speeding up your WordPress site. With some simple fixes, you can reduce your loading time by even 50-80%:

Layout and presentation by Karol K.

Or start the conversation in our Facebook group for WordPress professionals. Find answers, share tips, and get help from other WordPress experts. Join now (it’s free)!