Using Nothing But Docker For Projects — Smashing Magazine 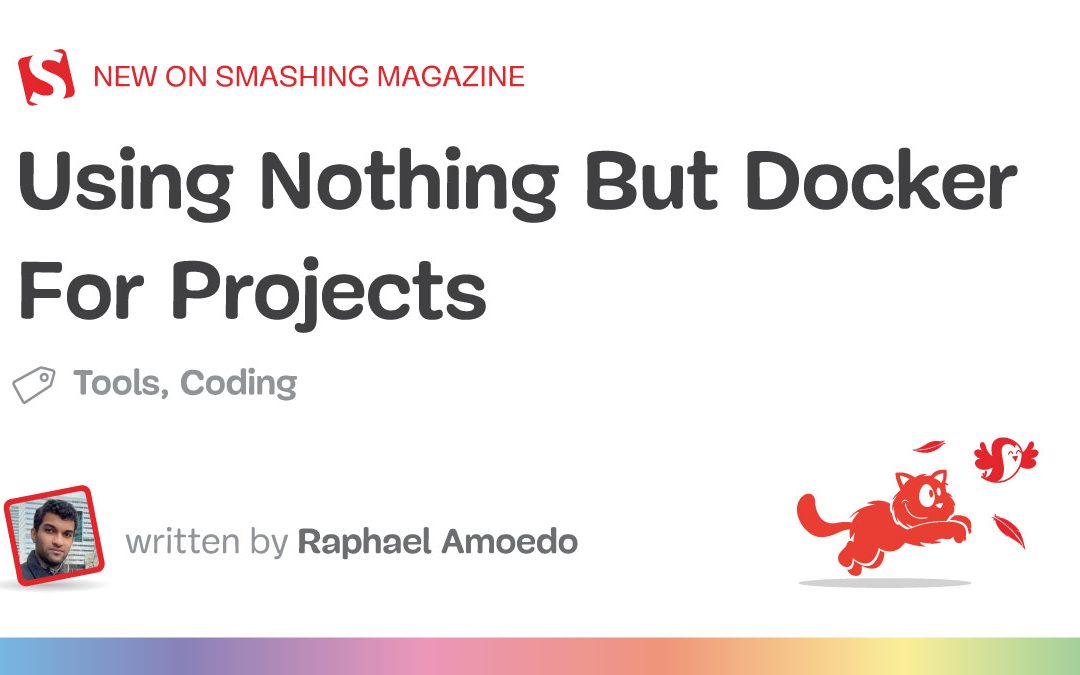 Using Nothing But Docker For Projects

Raphael Amoedo loves learning new tools and technologies and working with them. He is passionate about sharing with the community, spreading knowledge, and …
More about
Raphael ↬

Quick summary ↬
Using only Docker to build and run applications and commands removes the need for previous knowledge in some tool or programming language. Also, it avoids the necessity to install new modules and dependencies directly to the system, which makes development machine-independent.

Imagine the following situation: you start working on a new project, maybe also with a different programming language you’re not used to. So, the project is there, and you should be able to run it.

You hope there’s any documentation telling you what to do — which is not that common — and if/when there’s any, it usually doesn’t work. You need to know what to install, where to install it, how to set it up, etc. It’s not an uncommon scenario, and you can actually expect that at some point. But what if there was a way to ensure this won’t happen again?

Throughout this post, we’ll see different approaches we could use to make this easier using only Docker.

Level One: Using Alias With Docker

To generate the jar file and manage project dependencies, you can use a lot of different tools, with the most known being Maven and Gradle. Let’s consider Maven for this example. Let’s see some Maven commands:

Assuming we need Maven 3 and Java 11, that’s how you could use Docker:

This way, you can run any Maven and Java commands without having to install Java or Maven. You can test the commands by running java -version or mvn -version. Usually, the official Docker image of these tools gives you instructions on how to run it, and you can just create an alias for that.

It’s a fair approach, especially if you know what you’re doing. But that doesn’t come with the project itself. So, let’s try to improve it a bit.

That’s where Dockerfile starts to shine. We know how to run commands using only Docker, but how to run the application?

A common Dockerfile for that situation could be:

And you can build it the way you normally build a docker image, using docker build -t my-application ., for example.

You can see that it depends on an existing JAR file to build it. As you saw on the previous topic, we know how to generate it, but we would be in trouble if it were another programming language or tool.

It seems like a really minor improvement, but that helps a lot already, as you can see in its pros/cons:

It’s a good approach. You can merge Level One and Level Two to achieve a better result. The project should have Dockerfile, and life gets a bit easier already. But let’s see how life can be even easier.

Level Three: Using Docker For Building And Running The Application

What if you didn’t know anything about Java and Maven, and you were still able to build the application with just one command you already know?

How can that help us? Well, let’s consider the previous Dockerfile. We needed a JAR file to build the Docker image. With Multi-Stage Build, Dockerfile itself can be responsible for generating it. In a simple approach, that Dockerfile would look like this:

From the first FROM to the first RUN statement, it’s doing things related to Maven — copying the files that need to be copied and running the command that downloads the dependencies and builds the application. It’s doing that by using the maven:3-jdk-11-slim image, and it’s setting the name builder.

After that, you see the second FROM statement using the openjdk:11-jre-slim image. You also see a COPY statement which copies from a place called builder. But what’s that place? What’s that builder?

That’s the name we set for the Maven image at the first FROM statement. It’s copying the jar file from that container. So, you can literally play with different FROM entries to build whatever you want, and the command to build the Docker image is still the same: docker build -t my-application ..

Worth saying that you can also use this Dockerfile with Docker Compose, which can be really powerful, especially if your application needs to expose ports, sharing volumes, or it depends on other images.

Now that you know how to play with different FROM statements, another possible Dockerfile could be:

So, now we have four different steps: dependency_resolver, tester, builder, and the application itself.

Important: If you try to build the docker image with docker build -t my-application ., only the first, the third, and the last step (dependency_resolver, builder, and the application itself, respectively) would run.

When you try to build the image, it will try to see what the end state of the image is, which would be the application itself. As we know and can see, the last step depends on builder (COPY statement). If we check the builder step, we will see that it depends on dependency_resolver (FROM statement). So, it will run in this order:

Then what’s the tester step doing there? Is there a way to reach it?

We saw how to use only Docker to build and run applications and commands, removing the need for previous knowledge in some tool or programming language. Also, worth saying that even though we used Docker for these examples, this would also work with other container runtimes like Podman.

I hope you find this post helpful and spread the word about Docker.