Taking The Stress Out Of Design System Management 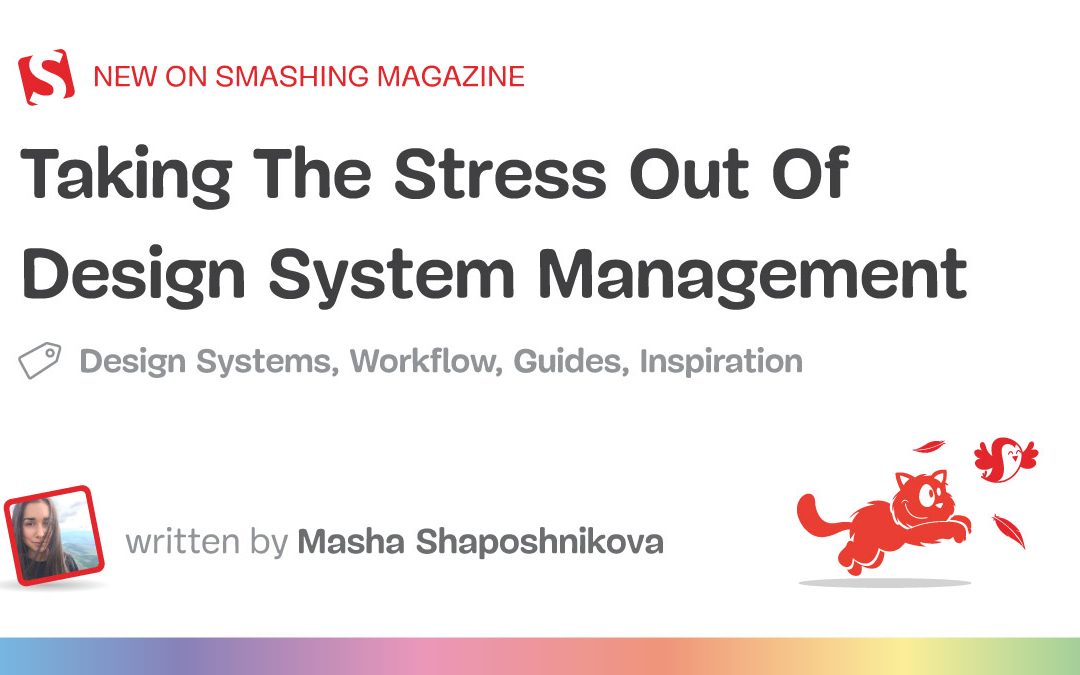 For the past four years, I’ve been figuring out how to set up my workflow to achieve that goal. In this article, I want to share what did and didn’t work for me and what you can do to:

Invest Time To Create A Plan

Unless you are joining a company from the outset, you’re probably not starting a design system from scratch. It’s essential to take the time and analyze what’s there instead of jumping right in and treating it like a blank canvas.

When I joined Karat, we already had two web apps: a customer-facing one and an internal one.

They were both parts of the same repository, which also included a package for our design system (KDS). Some styles and components were coming from the KDS package and were used by both apps. Some were unique to each app and lived in that respective app’s package. Some, however, were duplicated in both apps’ packages (and sometimes the KDS package too).

In addition to the existing codebase, we had designs in Figma with the new look and feel we wanted to pursue:

My manager and fellow designer Mark already did the hard job of defining the core elements and patterns through exploring scenarios and flows (Scenario-Driven Design Systems talk by Yesenia Perez-Cruz takes a deep dive in this topic). My task was to take the new vision, create a sustainable component library for both code and Figma, and integrate it into our app. It was also up to me to figure out how to organize and communicate my work.

I spent the first two weeks auditing our apps, our codebase, and our new designs. Investing that time upfront helped me to figure out a logical (given our context) sequence for implementing and rolling out the design system. Later on, it ensured a smoother transition between our old and new interface.

I wrote my tentative plan in our company’s Notion space (here’s a copy of the plan). There are four pages there:

Allowing anyone at the company to access the plan made it easier to communicate and define what was being done and in what order. It helped to turn the infamous “When is the design system going to be done?” question into a concrete “When will we be able to do ?”, which was possible to answer.

It’s also important to note that I never treated my plan as fixed. I expected priorities to shift, and they did. The plan was just a rough draft, a single place to track progress at a glance. Looking at it this way made it much less intimidating.

The success of any project is half implementation and half communication. It’s harder for people to support your work and advocate for you if they don’t know what you’re doing.

There are a couple of potential (mostly mental) blockers. Keep them in mind, and don’t let them get in the way!

In addition to these short updates, I also used to keep a Notion page with the release notes (an idea I borrowed from Carbon Design System changelog). That page was difficult to maintain, and no one even checked it. For our small team, short updates in Slack accomplished the same goal.

Takeaway: Just because a big company is doing something doesn’t mean you need to as well. Of course, it’s always worth testing out new ideas, but don’t be afraid to let them go if they don’t fit in.

A big part of design systems is to make sure that designers and developers don’t have to create the same components and styles over and over again.

So, why would we ever duplicate the same information in multiple places? This seems paradoxical, but it’s an easy trap to fall into.

Here’s How It Happens

Teams usually have different tools they use to manage their design or development assets. It’s normal. However, it doesn’t mean that everything should be everywhere. Constantly duplicating information leads to these two problems:

Here’s What You Can Do Instead

I find that the biggest issue for both designers and developers is what’s available and where to find it. Having a simple documentation website helps solve that issue with minimum effort on your part. Once you have a central starting point, you can start building out more specific, relevant documentation in respective designers’ and developers’ tools.

One thing worth duplicating

The high-level organization of components and styles should be the same across different tools. For example, we have divided our styles and components into nine groups:

Each group has 2 to 9 components. Although component content inside of each group may vary depending on the tool (for example, we have three different table components in code and only one in Figma), the number of groups, their names, and group order is always the same. Having the same organization makes it easier to jump from tool to tool and find what you need faster.

Unlike specific components, the group names (or their order) are rarely updated. And even if something changes, it’s not difficult to realign all tools.

If your engineers use a component library (for example, Chakra UI, tailwind UI, material UI, and so on), you should reference it. Most libraries are well-documented and have numerous examples you can play with. You don’t even need to know how to code (although getting familiar with the basics always helps).

Referencing the library will help you make tons of tiny decisions quickly whenever you have to figure out how a certain component should look and behave. It will also help to settle the naming debates (you can just go with the library’s component names to avoid confusion in the codebase). Lastly, it’ll then take less time for developers to implement the components.

Let’s look at an example.

Shown below are two filter menu components: one created in Figma by a designer and another one from the Chakra UI library:

When the designer created this component, they had no strong opinion of where the checkmarks should go. They also didn’t realize that the placement could create problems for engineering.

However, when the developer saw this component, they thought that the checkmark placement was purposeful and that’s how the component should be built. The developer then spent several hours tinkering with the component, only to realize that the change was not as trivial as it seemed. They ended up messaging the designer, who, at that point, switched to working on something else and really didn’t want to revisit the design. Also, other designers have already started using this component, which has pulled more people into the conversation.

Numerous back and forths lasted a couple of days, and eventually, the component was updated. A lot of valuable time was lost over something that didn’t deserve that much attention.

This situation (and many more like that) can easily be avoided if designers reference developers’ documentation from the start. Of course, you shouldn’t choose ease of implementation if it sacrifices user experience.

Keep Your Purpose In Mind

Take the time to think and write down why you love working with design systems. Personally, I do this because it reduces monotonous work for both designers and developers. It frees them to get more creative and spend more time thinking about their problems. And it helps them iterate through possible solutions faster.

While your answer might be different from mine, the overall theme will probably be similar.

So, why is it important to have a clear understanding of your purpose? Because it gives you something to lean on in moments of frustration.

Unfortunately, the nitty-gritty details of design systems work can turn anyone into a control freak. It’s easy to start feeling like your success depends on people using your system all the time just because you invest so much energy into it. What ends up happening is that you create a restrictive environment instead of a freeing, creative one.

I find that reminding myself of my purpose (rereading it or even occasionally rewriting it) helps me approach points of friction more calmly. It helps me figure out when I should step back and go work on something more substantial.

At the same time, it helps me figure out when I should push back. It gives me the confidence to speak out because I know I’m doing it in the interests of my team and not because I’m feeling defensive.

Another reason I love working with design systems is that I enjoy the process of work itself. Either playing in Figma or coding, that’s when I get into that sweet flow state. As the only person on the design systems team, though, I can’t spend all my time in the zone. I still need to organize, share, and communicate my work. Otherwise, no one will know about it, no one will use it, and it will be obsolete.

I can, however, manage the system in a way that lets me spend less time on the administrative stuff and more time doing what I love.

While I hope you find inspiration in the tips outlined here, I also hope that you will feel more comfortable questioning any established or common practices and only use them if they work for you and your team. Perhaps you will also feel more comfortable testing out your own ideas, no matter how unconventional they seem.