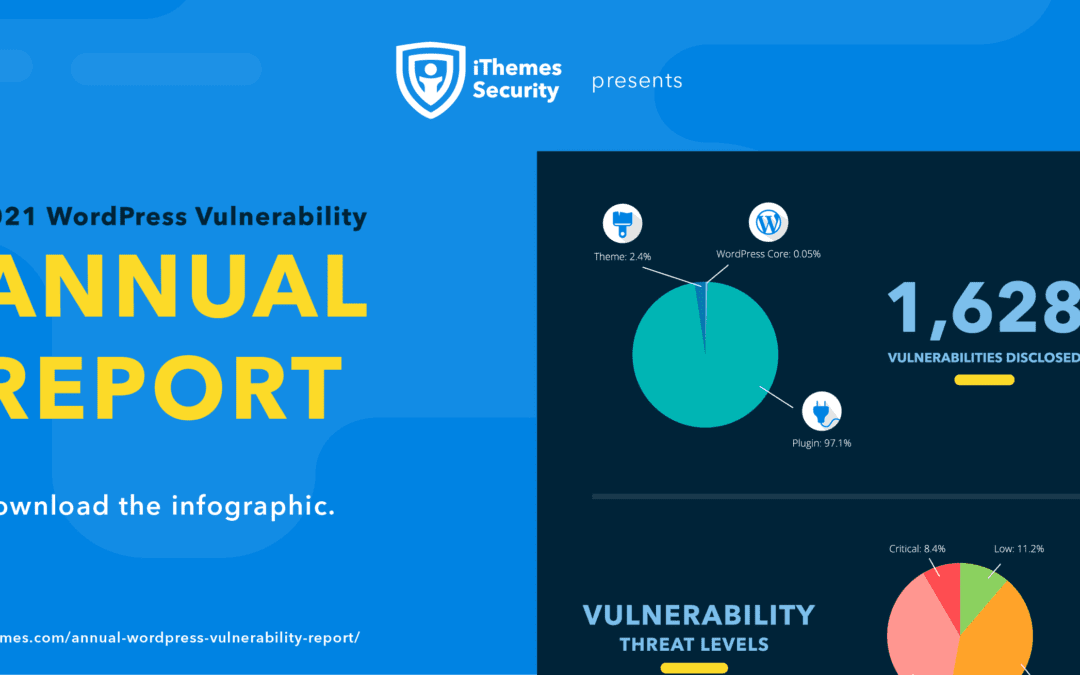 As a WordPress user or developer, you already know that one of the biggest challenges you face is fully securing your site from vulnerabilities and the threat of malicious attacks.

In an uncertain world where website and online security is under constant attack, all WordPress site owners need to take their security protocols more seriously than in the past.

For example, did you know that 97.1% of total 2021 WordPress vulnerabilities were due to plugins? That’s important to know if running a secure WordPress site matters to you.

Here at iThemes, we don’t want to just point out problems. We also want to give you proven solutions that work to keep your WordPress website site fully secure from vulnerabilities. And you’ll learn exactly what to do to fully secure your WordPress site after reviewing this data.

In 2021, a full 97.1% of all WordPress vulnerabilities disclosed last year were due to issues with plugins. You read that right.

But what’s most concerning is that, of the 1581 plugin vulnerabilities that were reported in 2021, 23.2% of them had no known fix. This means that, as we move forward into 2022 and beyond, we need to be all the more vigilant on the plugins we download and use.

For example, while you may be able to get a free plugin solution from an unknown plugin developer, do you fully trust its security? As the data shows, 29% of reported plugin vulnerabilities have yet to be patched by their developers.

Plugin Status at Time of Disclosure

Whenever possible, stick with the plugin developers that you trust and never use nulled WordPress plugins and themes. And, of course, keep your plugins and themes updated with available patches whenever they are released.

But even when you do that, vulnerabilities will still be exploited by skilled hackers and malicious attackers before plugin developers can create patches to fix them.

This is exactly why your WordPress site needs rock-solid security protection, as we’ll discuss in a minute.

For now, it’s important to know that the iThemes Security Pro plugin has a built-in site scanner that pairs with the Version Management feature to automatically scan for known vulnerabilities and auto-update any vulnerable plugins so you don’t have to worry so much about your site security.

Vulnerabilities Per Individual Plugin/Theme/Core By Month (2021)

While it certainly isn’t possible to know if a similar pattern will play out as we move further into 2022, this is certainly important data to keep our eyes on.

Vulnerabilities By Threat Level By Month (2021)

Cross-site scripting (XSS) is a type of website security vulnerability that is found in many WordPress applications, such as plugins and themes.

These XSS attacks enable attackers to inject client-side scripts into WordPress web pages viewed by other users. A cross-site scripting vulnerability may be used by attackers to bypass access controls, and fully access the back end of your site.

As you can see, cross-site scripting is a major security concern for all WordPress site owners. But the vulnerability concerns don’t end there.

Another 10.2%, or 167 vulnerabilities, stemmed from Cross-Site Forgery Requests (CSFR).

Cross-site request forgery, also known as one-click attack or session riding, is a type of malicious exploit of a website where unauthorized commands are submitted from a user that the web application trusts.

It doesn’t take long to see that, without proper WordPress security protocols in place, your WordPress website is wide open to cross-site attacks of all kinds.

And don’t dismiss the 281, or 17.3%, of reported vulnerabilities that are labeled in the report as “Other.”

Often, these types of attacks are the ones that aren’t yet understood by theme and plugin developers, and require a powerful WordPress security plugin to keep them from damaging or hacking your site.

As a WordPress site owner, you probably already know the importance of keeping your plugins updated at all times to avoid potential attacks.

After all, the vast majority of vulnerabilities are exploited through plugins.

But, as the 2021 numbers indicate, plugins aren’t where your security protocols begin and end. Even if you’re 100% vigilant with the plugins you use and keeping them updated, your site can still be exploited by vulnerabilities in your theme.

And while that may not seem like much, it only takes one exploited site vulnerability to completely ruin the reputation of your website and business.

Of course, the first solution is to keep WordPress core and your theme fully patched and updated at all times. But as we stated regarding plugins, that only helps solve past known vulnerabilities.

For the new ones, you need to run security software that knows how to detect when malicious attacks are happening in real time.

Make Sure to Keep Website Security a Focus in 2022

This is where the iThemes Security Pro plugin steps in to help keep your WordPress site secure. With our easy-to-use, straight forward WordPress security solution, you’ll immediately be able to sleep better at night knowing that your site is fully protected from hackers and malicious attacks.

The first step is understanding the bombardment of security threats your site is constantly under. After that, it’s time to get iThemes Security Pro and get serious about your WordPress website security protocol.

With a built-in WordPress site scanner to scan for known WordPress vulnerabilities, paired with layers of protection for your login page like brute force protection, as well as file change detection and user logging, your site has a strong defense against hacks and security breaches.

Built by the WordPress security experts since 2014

WordPress currently powers over 40% of all websites, so it has become an easy target for hackers with malicious intent. iThemes Security Pro takes the guesswork out of WordPress security to make it easy to secure & protect your WordPress website. 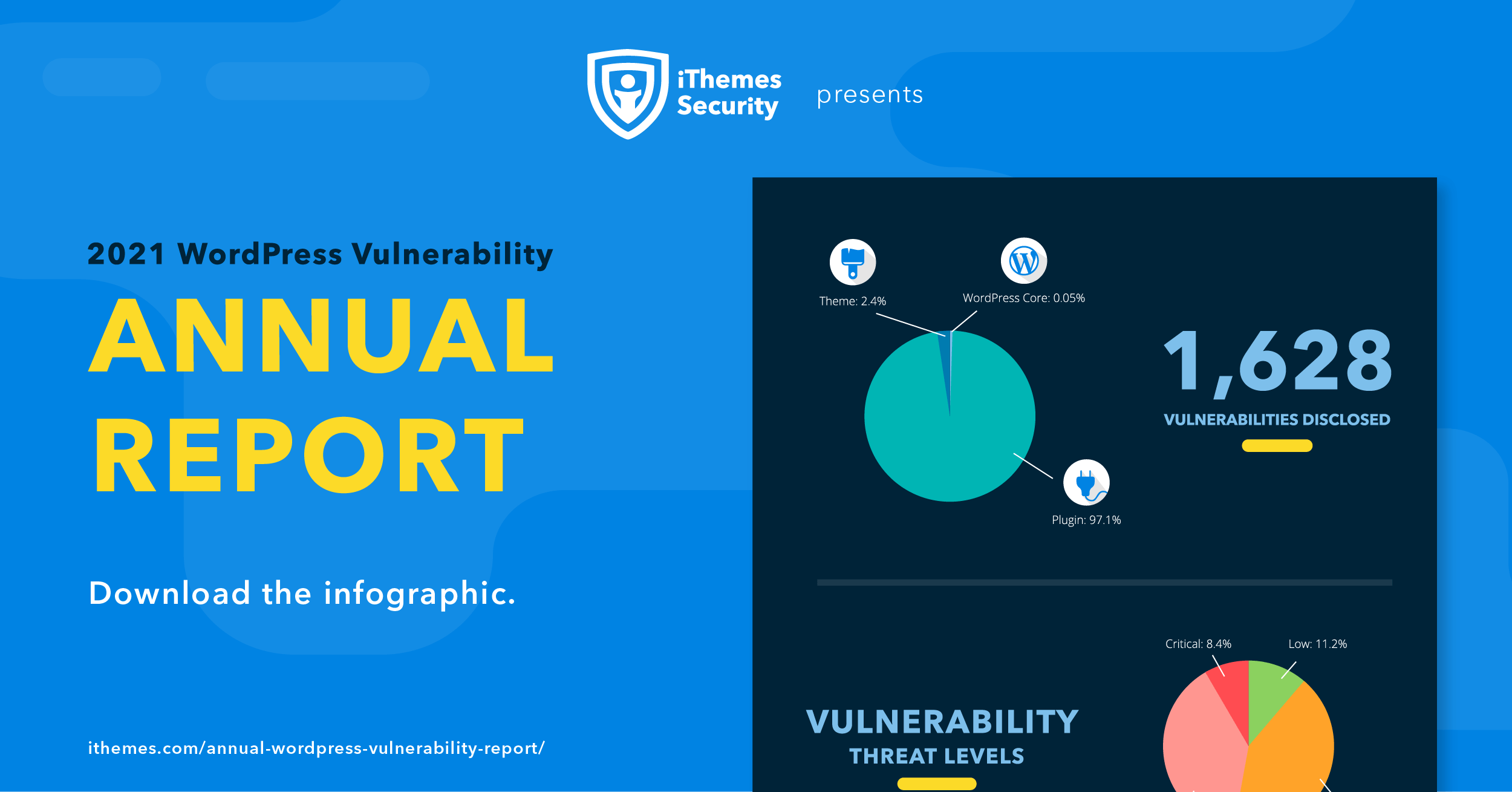