Join Us to Build the Next Generation of WordPress Donation Forms 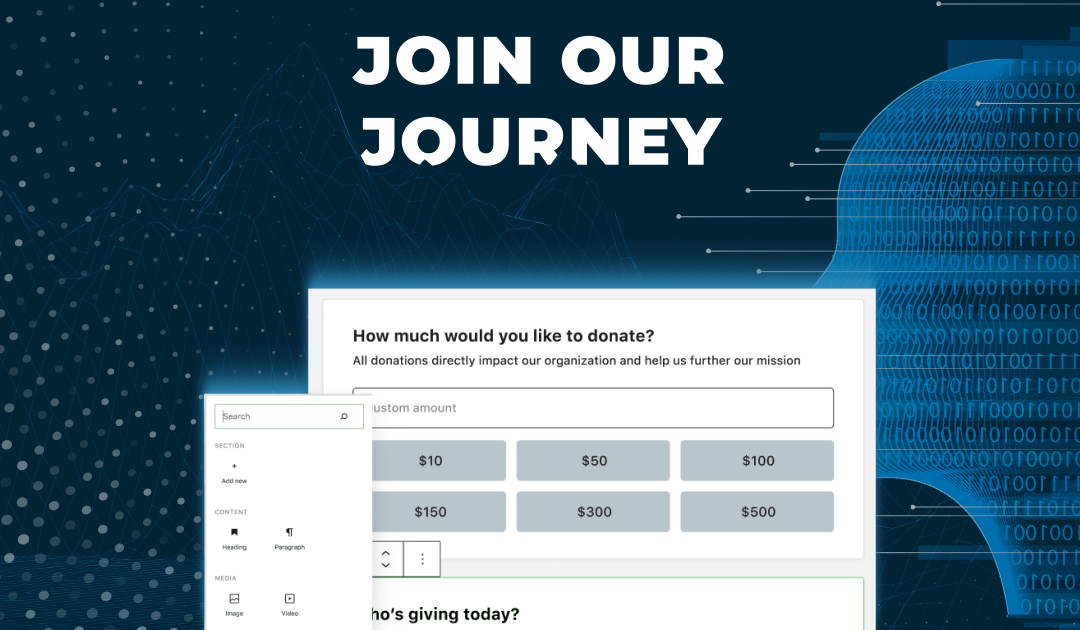 We are building the next generation of donation form building in WordPress. It’s a visually powerful, intuitive, and flexible form builder using the WordPress block editor as its base. We want to invite you into this journey through a series of release events. But first, why and how are we even doing this?

Since its inception in 2015, GiveWP has grown and changed considerably. We’ve added dozens of add-ons, rebuilt how our payment gateways work, re-imagined portions of the admin interface, and so forth. What hasn’t changed much is how forms themselves fundamentally work. Why not? Simply, because it’s the most core feature of GiveWP and we take backwards-compatibility very seriously. As we grew, though, we found that the ways forms work have some problems…

Why Are We Creating a New Visual Donation Form Builder?

First thing’s first- why do we need to rebuild the way GiveWP creates donation forms? What isn’t broken shouldn’t be fixed right?

The first reason is to more closely match your visual expectations when you are building your donations form. Currently, you are presented with a bunch of settings and options. You fill out a lot of settings, click publish, and then you simply see a success message. You don’t actually see what your form looks like. To do that, you go to either the form single page, or you embed your form in a page or post. Then, if you don’t like what you see, you go back to those settings and try to guess which of them will give you the aesthetic that you’re looking for.

Second, it was way too difficult to modify the fields on the form — adding some, moving others around, and so forth. Not only was it not a visual experience, but it required too much technical know-how from our users.

A couple years ago, we had the idea to start making forms that were beautiful and easy to use. We wanted users to be able to create a gorgeous form, make some minor easy adjustments like colors, and drop it on their website in minutes. We called this Form Templates. The problem? Making a template is very, very hard. Frankly, it took a month or two for our team to create the Classic Template alone. If it was this hard for us, it was just too much to expect of even our advanced users.

With these three significant pain points in mind, we decided it was time to rebuild how our forms worked from the ground up. To be clear, we didn’t just take our old forms and slap some new paint on them. The next generation of forms are completely reimagined: both under the hood and how they’re built by the user.

How We Are Developing the Next Generation Donation Form Builder

The first thing we knew we wanted to do was to make a visual form builder. We wanted users to be able to see their entire form when building it and use simple drag-and-drop actions to build and modify the form to their liking. Not only that, but we also wanted every piece of the form to be modifiable, so it is structured exactly as the user wants it without any felt effort. Finally, we wanted to make the experience familiar to WordPress, so the user didn’t have to learn something completely new.

Fortunately, there’s already a system built into every WordPress website that enables us to do all of those things: The WordPress block editor, aka “Gutenberg.” We’ve taken the “bones” of Gutenberg and tailored it for building flexible and powerful donation forms while maintaining the same user experience of blocks and the familiar block editor appearance. We’re incredibly excited about this!

In order to do this, though, we needed to lay a solid, new foundation within GiveWP. The next piece is a bit more developer-heavy.

Last year, we quietly started building something we called the “Fields API.” We needed a way of describing the structure of a donation form without committing to what it looks like. For example, a form may have three sections, the first section has a heading, a description, and an amount field (where the donor chooses how much to give). Well, what if we want a fourth section? Or to add a text field after the amount field? The Fields API gives us the ability to build out our form to fit exactly our needs, and then later pass that information to be rendered on the page for the donor to see in use. It’s a bit technical, but in short, the Fields API makes the donation forms as customizable as possible.

Finally, the Fields API data passes the donation and donor information to a completely new “rendering engine.” This is how a form is turned from a series of blocks and code into a donation form. We built this with the concept of templating in mind. This means that any form can look like anything, and very easily. This has allowed us to drastically speed up the process of creating new donation form templates.

With this new “rendering engine”, Fields API, and Template API in place, forms can now quickly be built with the Gutenberg editor, and new form templates can be designed and built far more quickly than ever before. Not only that, but it’s first-class and simple, meaning we’ll be able to document this and make building templates something our more advanced users can take advantage of to make forms completely unique to their needs.

How to Get Involved in the Next Generation of GiveWP!

While we’re incredibly excited about what we have in store, we’re also eager to hear from you to help us make sure the next generation of GiveWP fits your needs. We’re going to be releasing a GiveWP Next Gen feature plugin so you can try it out and give us feedback.

Here’s the roadmap of how you can be involved:

If you want to join us on this journey, head to the project page and sign-up to get notified of our progress, get sneak peek previews, participate in polls, and we might even be throwing in discount codes and swag items too!

Help shape the next generation of WordPress donation forms

But When and How Can I Use it and is it Safe?

With big changes like this on the horizon, it’s very natural to feel a combination of excitement and anxiety. “Wow, it looks so great! But… is it going to break my existing stuff?” So we wanted to take a quick moment to address that.

Our current plan is that as long as the new form builder is a feature plugin, you should only install it to test it out for yourself – not on your live site or with real donors. It is for testing purposes only.

Once the feature plugin is feature-rich and well-tested and compatible with our most popular add-ons, it will be merged into the free GiveWP plugin. We’ll release that as GiveWP version 3.0.

GiveWP 3.0 will be fully compatible with your existing forms. You will have the option to migrate forms to the new visual form builder on a per form basis. All newly created forms will use the new system. When you migrate an old form, it makes a copy of your old form into the new system — this way, if there’s a problem you still have the original form, and you can test out the new one before replacing the old one on the front-end of your website.

We’re extremely excited to start sharing our progress with you, so head to the project page and sign-up for the Town Hall on Wednesday, August 18 at Noon Pacific Time. Attendees will be able to ask questions and be provided with links and resources to provide additional feedback, and there might even be some exclusive GiveWP NextGen Swag too!

Help shape the next generation of WordPress donation forms