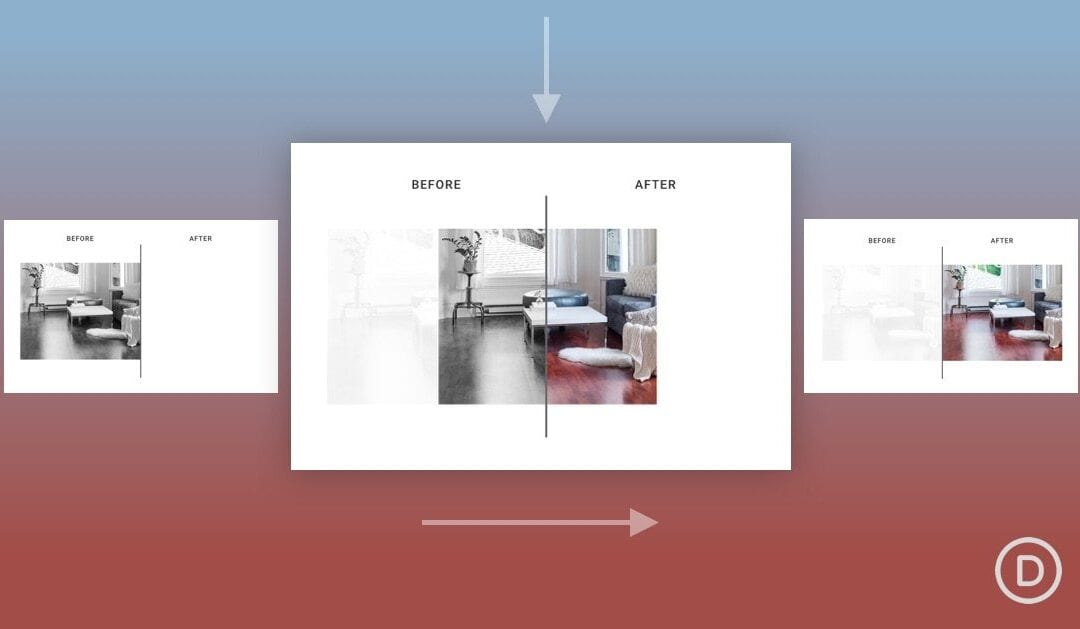 In this tutorial, we are going to show how to create scroll animated before and after images in Divi. With this design, the user will see the transition of the before and after images as they scroll down the page. This is a great way to engage users to scroll down your site and see the transformation in a unique way. Plus, we can build this using only Divi’s built-in options. No custom code or plugin needed!

Here is a quick look at the design we’ll build in this tutorial.

To lay your hands on the designs from this tutorial, you will first need to download it using the button below. To gain access to the download you will need to subscribe to our Divi Daily email list by using the form below. As a new subscriber, you will receive even more Divi goodness and a free Divi Layout pack every Monday! If you’re already on the list, simply enter your email address below and click download. You will not be “resubscribed” or receive extra emails.

Creating Scroll Animated Before and After Images in Divi

Now we are ready to begin creating our scroll animated before and after images in Divi. To do this we will first need to create a two-column row that will not wrap (or break) on mobile. Each of the columns will also need to have the overflow hidden so that the before and after images will slide out and in to view within each column on scroll. Once the columns are in place, we will add our images to each column and add the styling and horizontal scroll animation to each one. Once that is in place, we will add the before and after heading text above the images.

To begin, add a two-column row to the default regular section using the Divi Builder on the front end.

Open the row settings and update the following:

To make sure the columns don’t wrap or break into a one-column layout on mobile, open the advanced tab and add the following custom CSS to the Main Element:

Next, open the settings for column 1 and update the design settings as follows:

Under the Advanced tab, update the overflow as follows:

Remember, each of the columns will need to have the overflow hidden so that the before and after images will slide out and in to view within each column on scroll

Next, open the settings for column 2 and update the design settings as follows:

NOTE: The right and left border on each column create the middle line that will be the center point of the before and after image transition.

Then update the overflow to hidden for this column as well.

Part 2: Creating the Before and After Images

To create the first image, add a new image module in column 1.

Then upload an image to the module.

Under the design tab, update the following width options:

NOTE: Each of the max-width dimensions are determined by exactly half of the row minus the 2px border. So for desktop, the row has a max-width of 900px.  Half of the row is 450px. Then take away the 2px added by the border and you get 448px.

To create the next two images, duplicate the image module three times.

Then move one of the images into column 2.

To style the before image “shadow”, open the settings for the first (or top) image in column 1 and update the filter option as follows:

To make sure the shadow image is positioned directly behind the before image, update the position of the image as follows:

NOTE: The vertical offset should be equal to the top padding of the column so that the images stay vertically aligned.

Before Image Styling and Scroll Settings

Next, open the settings for the second image in column 1 (now sitting above the shadow image) and update the saturation filter to make it a black and white version of the image as follows:

Under the advanced tab, select the horizontal motion tab under Scroll Transform Effects and enable the Horizontal Motion. Then update the following:

NOTE: Keep in mind that the offset values are set in pixels. A value of 1 is equal to 100px. So a value of 4.52 is actually 452px. So at the end of the horizontal animation on desktop, the image will have moved 452px to the right. The 452px is determined by half of the row (450px) plus the 2px border.

Before taking a look at our scroll animation so far, we need to add some temporary top and bottom margin to the section so that we will have some room to scroll on the live page.

Open the section settings and update the following:

Now check out the result on a live page.

Part 4: Creating the Before and After Heading Text

To finish off the design, we need to create the before and after heading text above each image.

To do this, create a new two-column row.

Copy the row styles from the previous row containing our images.

Then paste the row styles to the new row.

Once the row is done, drag in on top of the row containing the images. Then add a new text module to column 1 of the new row.

Then replace the body text with the following:

Under the design tab, update the following H2 heading styles:

To create the heading for the after image, copy the text module and paste it into column 2 of the same row.

Then update the H2 text to “after” instead of “before”.

Here is the final result.

And here is what it looks like on tablet and phone display:

And here are a few more examples of what you can do simply by replacing the images used.

In this tutorial, we showed you how easy it is to build your own custom scroll animated before and after images using Divi. What is great about this design is that it is easy to replicate for more before and after image examples. All you need to do is duplicate the section and update the images! Keep in mind that for best results, you will want to keep those images the same size so that they keep themselves aligned during the animation.

Hopefully, this will give you an extra design boost for your next project that may need to showcase before and after images.