Image overlays continue to be a popular design asset when displaying images on your website. Not only do they offer a creative way to showcase images, but also they can make viewing images more fun and engaging for visitors, especially when you add custom animations when hovering or clicking the image.

Let’s jump in and get started!

Here is a quick look at the Image overlay designs from this tutorial.

And here is a codepen that demonstrates the same design used in this tutorial.

To lay your hands on the image overlay split text shutter animation designs from this tutorial, you will first need to download them using the button below. To gain access to the download you will need to subscribe to our Divi Daily email list by using the form below. As a new subscriber, you will receive even more Divi goodness and a free Divi Layout pack every Monday! If you’re already on the list, simply enter your email address below and click download. You will not be “resubscribed” or receive extra emails.

For this first part of the tutorial, we are going to build the initial setup of the image overlay with the split text shutters. Once this is done we can add animation to the shutters later on.

To start, add a two-column row to the regular section.

Before, adding modules, open the row settings and update the gutter width:

To designate our column as the “shutter column” and to animate it later “on hover”, add the following CSS Classes to the column:

Then update the overflows to hidden so that we won’t see the transformed elements once they go beyond the column container during the animation.

Inside column 1, add an image module. This will serve as the main image that we will sit behind the shutter overlay.

Upload an image to the image module.

Then set the alignment of the image to the center.

Now that our image is in place, we are going to add the top shutter using a text module. Add a new text module under the image.

Update the text module content by adding the text “divi” to the body area.

Under the design tab, update the text style as follows:

Next, update the sizing and spacing options:

Under the Advanced tab, update the following:

We’ll use the CSS Class to toggle the transform animation on and off with our code later on.

Then add this custom CSS to the Main Element:

This code uses flex to make sure the text is vertically aligned at the bottom of the module. Since the text has a line-height of 0, the text will be shown as split showing only the top half.

To position our top shutter, we need to first hide the overflow of the text and then give it an absolute position as follows:

This will move the shutter over the top half of the image.

Now that we have our top shutter completed, we can jumpstart the creation of the bottom shutter by duplicating the top shutter text module.

Then open the duplicate text module and update the following:

Update the Main Element CSS by replacing the “flex-end” with “flex-start” for the align-items property. Here is the final CSS:

With “flex-start” the text is vertically aligned at the top of the module. And since the text has a line-height of 0, the text will be shown as split showing only the bottom half.

Then update the absolute position with a vertical offset as follows:

This brings the shutter text module to sit above the bottom half of the image.

The split text on both shutters should now be aligned as a perfect match.

We will use this as kind of a starter template for the next few examples that will include the shutter effect animations using transform properties.

To add the functionality of the shutter animation, we need a few snippets of CSS and JS using a Code module.

Add a new code module to the page. We can add it to the right column of the very first top section we used for our initial overlay build.

Paste the following CSS in the code box making sure to wrap it with the necessary style tags:

This CSS is really simple. All it is doing is applying transform: none to the shutters inside the column with the class “divi-transform-none”. This class will be toggled on and off with JS to create the animation. The transition: transform 1s simply sets the duration of the transition (or animation) to last 1 second.

After the CSS, add the following JQuery to the code box making sure to wrap it with the necessary script tags:

The first part of the code adds the functionality that toggles the shutter transform animations on hover whenever a column has the classes “shutter-column on-hover divi-transform-none”.

The second part of the code adds the functionality that toggles the shutter transform animations on click whenever a column has the classes “shutter-column on-click divi-transform-none”.

To create our first shutter animation design, we are going to jumpstart the design process by duplicating the first section. This will give us a new section with a pre-built image overlay with the split text shutters ready to go.

If you did it right, the top shutter will no longer be visible which is what we want because we want the entire main image exposed after the animation transition.

For the Bottom Shutter, update the following transform design options:

Add a Class to Disable the Transform Designs Initially

Because of the custom CSS code we added earlier, the design will appear without any transform designs in place.

To get the same animation triggered on click instead of on hover, all we need to do is replace a single class in the column.

First, duplicate column 1 with our first working example on hover. Then delete the empty column. Now you should have two identical columns with the same classes and content.

Open the settings for column 2 and replace the “on-hover” class with the “on-click” class. Here is what the final three classes should be:

Reversing the Shutter Animation on Hover

If you want the main image to be displayed uncovered initially and then add the overlay when hovering over the image (the reverse of how it works now), you can remove the class “divi-transform-none” in the column used for the shutter. This will give you the following effect.

Then use multiselect to select the top shutter and bottom shutter text modules. Then open the element settings for both and update the following:

Then update the image module with a new image.

Use multiselect to select both the top shutter and bottom shutter text modules and open the element settings for both to update the following: 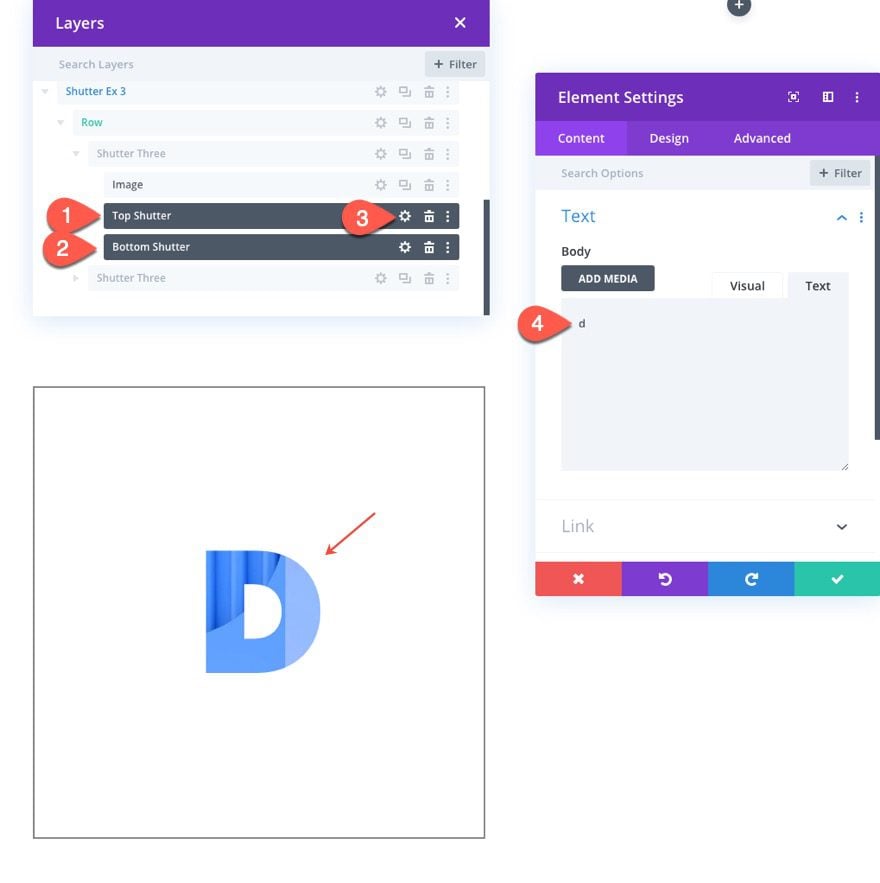 Here is one that is similar to design #2 but without the transform scale on the shutters. It also shows how the lightbox effect still works on the image.

And here is another example that uses transform translate to slide the shutters horizontally.

Creating image overlays with split text shutter animations in Divi can be an effective approach for making your images stand out and engaging visitors in a fresh way.

Hopefully, this will spark your creativity to add your own designs and transform animation effects using different colors, fonts, blend modes, etc. The possibilities seem endless.