Enō: ‘Probably This Is the Best Blogging Theme Ever’ – WordPress Tavern 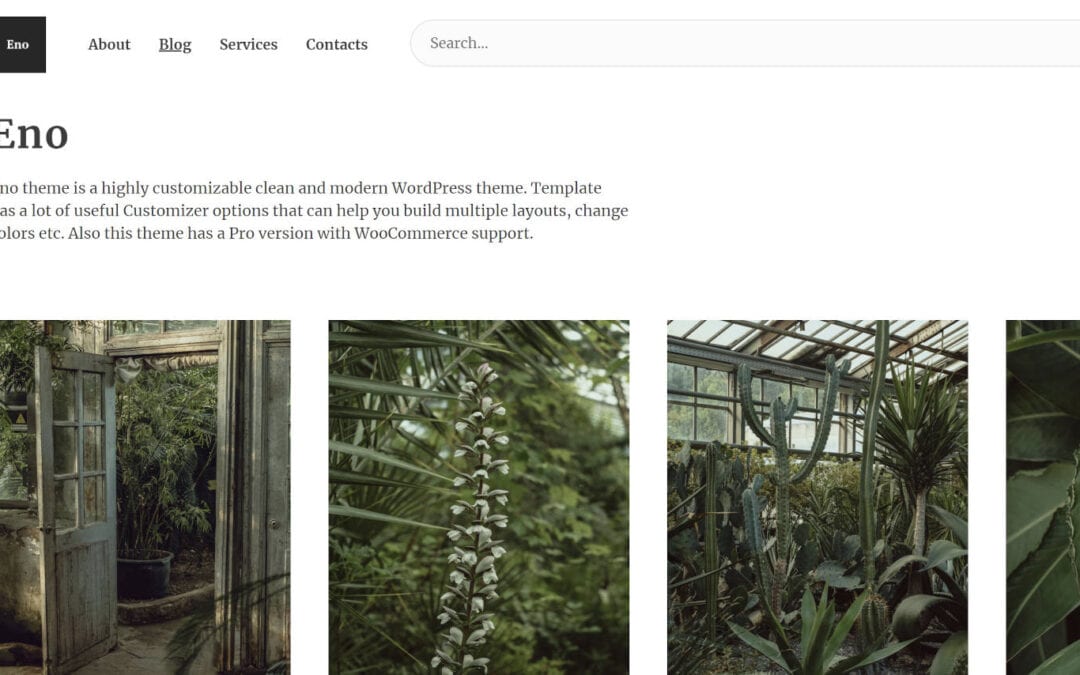 Sometimes a theme’s description is so moving that one must install, activate, and test the project. I often rail against the obviously keyword-stuffed text in the free WordPress theme directory. But, I am pleasantly surprised from time to time.

Enō is an elegant, modern and functional WordPress theme. Probably this is the best blogging theme ever. Just see the demo at…It supports Gutenberg block editor and has a lot of Customizer options…

Thus began my journey into Enō, an upcoming theme by Ivan Fonin. I could have been partially a language-barrier thing. Or, the author could have just been having a bit of fun. Nevertheless, it was the sort of description that stood out enough to pull into my test environment. Any blogging theme claiming the title of “the best” was at least worth a look.

What I found was a well-designed theme that focused on some of those timeless elements, such as generous use of whitespace and sound typography. I would not go so far as crowning it the best ever created, but it will undoubtedly be the perfect fit for many bloggers in the future.

Currently, the theme is awaiting a review before it lands in the official WordPress theme directory. However, those who want to try it out early can snag a copy of the ZIP file from its Trac ticket.

Enō tackles the intricacies of block editor design like a pro. In areas where so many “block-ready” themes fail to live up to expectations, it is a textbook example of working alongside the block system.

Where it falls short is that it does not go beyond nailing down the basics of block design. The theme bundles no patterns, which would allow users to quickly drop in more advanced layouts. It also does not include block styles or even a custom color palette. There are no unique elements in the design where the author stamps his own signature in bold. It is almost formulaic, but that is not necessarily a bad thing. Formula can feel good. It can be comforting when you need something that simply gets out of the way and allows your content to shine.

While Fonin bills the project as a blogging theme, it stands out as a solid option for photographers. The open-canvas layout leaves ample room for large images and galleries, and the theme’s demo is filled with examples.

What would make this theme even better would be a few image and gallery styles, allowing end-users to spruce up their blocks a little more.

As much as I like the theme, it does tick one of the boxes from my most-irritating-things-that-themes-do checklist. It outputs the featured image on single post views above the post content. This creates the dreaded double-image issue when a user also uses the same image in the post itself. The easy fix for this is to provide a theme option for not showing the featured image on single posts.

It is a surprise that the theme does not have this option because it allows users to enable or disable nearly everything possible outside of the post content. It has three different areas where metadata can be shown: before the post title, after the title, and after the content. Users can pick and choose what appears where via a series of checkboxes. The approach is convoluted at best and is a good representation of why we need the site editor. This is not so much the fault of the theme as it is a limitation of the customizer. Instead of ticking and unticking boxes, users could simply move blocks around to their desired location.

The comments are broken in the theme at the moment. Each comment’s text is outputting a simple comma instead of the content. I am sure this will come up in the theme review and be addressed before it goes live.

For users looking for a minimalist, block-ready theme, this will be a solid option once it makes it through the review process. I look forward to the day when themes like Enō are the baseline when designing for the block system.