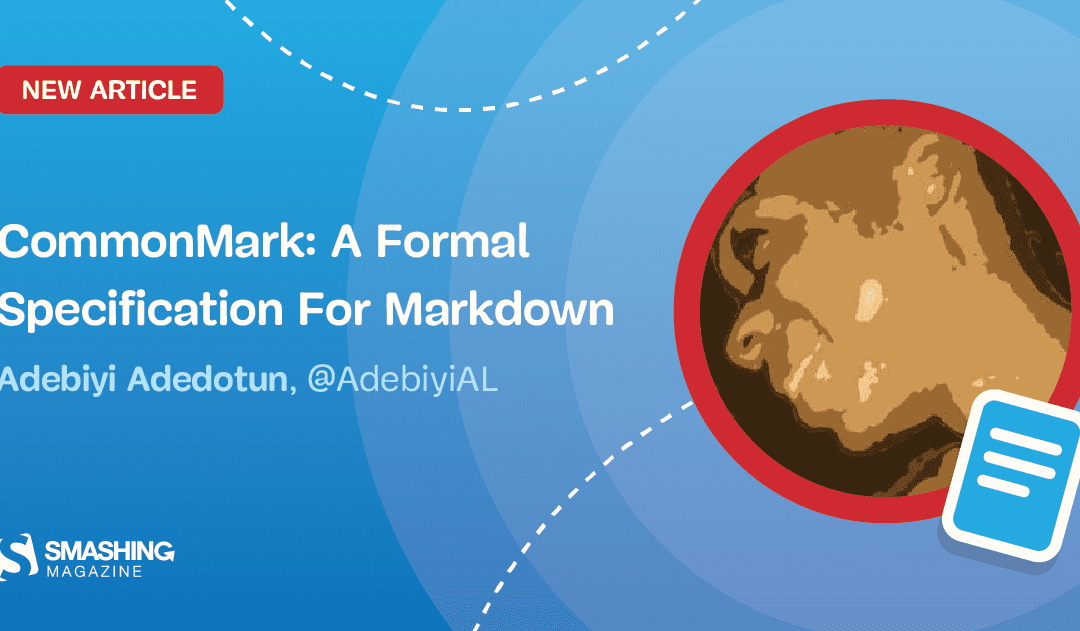 Adebiyi Adedotun Lukman is a UI/Frontend Engineer based in Lagos, Nigeria who also happens to love UI/UX Design for the love of great software products. When …
More about
Adebiyi
…

CommonMark: A Formal Specification For Markdown

Every week, we send out useful front-end & UX techniques. Subscribe and get the delivered to your inbox.

Markdown is a powerful markup language that allows editing and formatting in plain text format that can then be parsed and rendered as HTML. It has a declarative syntax that is both powerful and easy to learn for technical and non-technical folks. However, due to the consequential ambiguities in its original specification, there have been a number of distinct flavors (or custom versions) that aim to erase those ambiguities as well as extend the original syntax support. This has led to a steep divergence from what can be parsed and what is rendered. CommonMark aims to provide a standardized specification of Markdown that reflects its real-world usage.

CommonMark is a rationalized version of Markdown syntax with a spec whose goal is to remove the ambiguities and inconsistency surrounding the original Markdown specification. It offers a standardized specification that defines the common syntax of the language along with a suite of comprehensive tests to validate Markdown implementations against this specification.

GitHub uses Markdown as the markup language for its user content.

In 2012, GitHub proceeded to create its own flavor of Markdown — GitHub Flavored Markdown (GFM) — to combat the lack of Markdown standardization, and extend the syntax to its needs. GFM was built on top of Sundown, a parser specifically built by GitHub to solve some of the shortcomings of the existing Markdown parsers at the time. Five years after, in 2017, it announced the deprecation of Sundown in favor of CommonMark parsing and rendering library, cmark in A formal spec for GitHub Flavored Markdown.

CommonMark has been widely adopted and implemented (see the List of CommonMark Implementations) for use in different languages like C (e.g cmark), C# (e.g CommonMark.NET), JavaScript (e.g markdown-it) etc. This is good news as developers and authors are gradually moving to a new frontier of been able to use Markdown with a consistent syntax, and a standardized specification.

A Short Note On Markdown Parsers

Markdown parsers are at the heart of converting Markdown text into HTML, directly or indirectly.

Parsers like cmark and commonmark.js do not convert Markdown to HTML directly, instead, they convert it to an Abstract Syntax Tree (AST), and then render the AST as HTML, making the process more granular and subject to manipulation. In between parsing — to AST — and rendering — to HTML — for example, the Markdown text could be extended.

Projects or platforms that already implement the CommonMark specification as the baseline of their specific flavor are often superset of the strict subset of the CommonMark Markdown specification. For the most part of it, CommonMark has mitigated a lot of ambiguities by building a spec that is built to be built on. GFM is a prime example, while it supports every CommonMark syntax, it also extends it to suits its usage.

CommonMark’s syntax support can be limited at first, for example, it has no support for this table syntax, but it is important to know that this is by design as this comment in this thread of conversation reveals: that the supported syntax is strict and said to be the core syntax of the language itself — the same specified by its creator, John Gruber in Markdown: Syntax.

At the time of writing, here are a number of supported syntax:

To follow along with the examples, it is advised that you use the commonmark.js dingus editor to try out the syntax and get the rendered Preview, generated HTML, and AST.

In Markdown, paragraphs are continuous lines of text separated by at least a blank line.

The following rules define a paragraph:

Headings in Markdown represents one of the HTML Heading elements. There are two ways to define headings:

Emphasis in Markdown can either be italics or bold (strong emphasis).

A Horizontal rule, <hr/> is created with three or more asterisks (*), hyphens (-), or underscores (_), on a new line. The symbols are separated by any number of spaces, or not at all.

Links are supported with the inline and reference format.

The following rules define a link:

Images in Markdown follows the inline and reference formats for Links.

The HTML Block Quotation element, <blockquote>, can be created by prefixing a new line with the greater than symbol (>).

Blockquotes can be nested:

The HTML Inline Code element, <code>, is also supported. To create one, delimit the text with back-ticks (`), or double back-ticks if there needs to be a literal back-tick in the enclosing text.

The HTML Preformatted Text element, <pre>, is also supported. This can be done with at least three and an equal number of bounding back-ticks (`), or tildes (~) — normally referred to as a code-fence, or a new line starting indentation of at least 4 spaces.

According to John Grubers original spec note on inline HTML, any markup that is not covered by Markdown’s syntax, you simply use HTML itself, with The only restrictions are that block-level HTML elements — e.g. <div>, <table>, <pre>, <p>, etc. — must be separated from surrounding content by blank lines, and the start and end tags of the block should not be indented with tabs or spaces.

However, unless you are probably one of the people behind CommonMark itself, or thereabout, you most likely will be writing Markdown with a flavor that is already extended to handle a large number of syntax not currently supported by CommonMark.

CommonMark is a constant work in progress with its spec last updated on April 6, 2019. There are a number of popular applications supporting it in the pool of Markdown tools. With the awareness of CommonMark’s effort towards standardization, I think it is sufficient to conclude that in Markdown’s simplicity, is a lot of work going on behind the scenes and that it is a good thing for the CommonMark effort that the formal specification of GitHub Flavored Markdown is based on the specification.

The move towards the CommonMark standardization effort does not prevent the creation of flavors to extend its supported syntax, and as CommonMark gears up for release 1.0 with issues that must be resolved, there are some interesting resources about the continuous effort that you can use for your perusal.