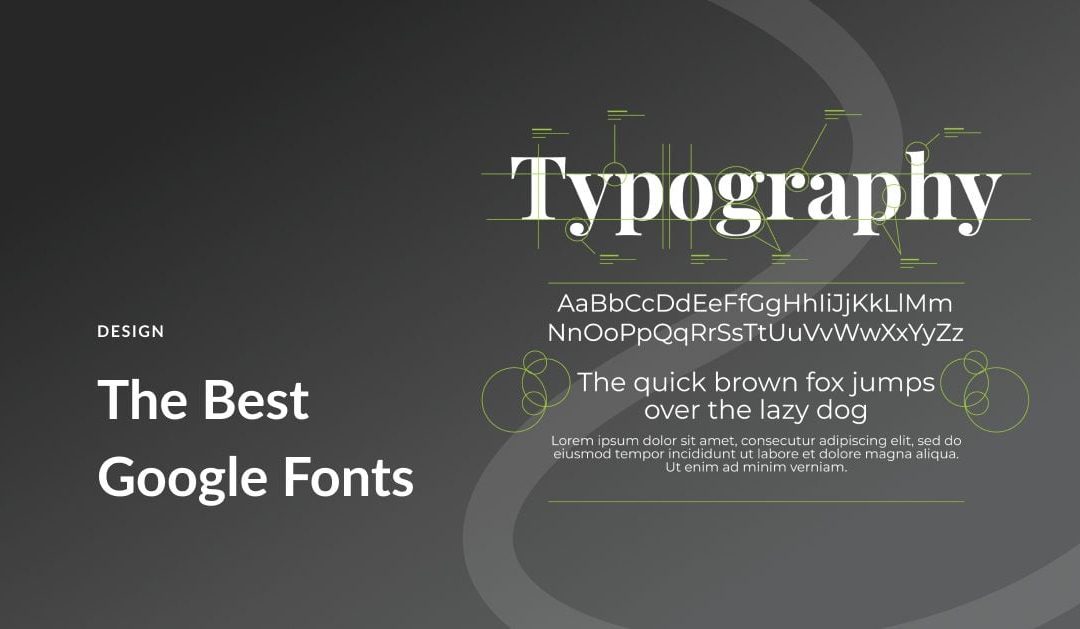 When creating a website, font choice is an important aspect of the overall look and feel of your site. Fonts need to be easy to read, but also aesthetically pleasing. If you choose the wrong font, it can disrupt the user’s experience, and actually make your content hard to read. Thanks to Google, there are plenty of font choices available to you. Since its launch in 2010, Google fonts have come a long way from their 19 font offerings. There are now over 1450 choices currently available, so picking the right fonts can be daunting. In this post, we’ll make your life a little easier by providing our list of the best Google fonts to use on your website.

What Are Google Fonts?

Google Fonts are a collection of high quality web fonts for use on web projects. Additionally, all fonts can be downloaded for installation on local systems. Fonts are pulled into your website through Google’s content delivery network (CDN), and will load automatically once installed.

Why Should You Use Google Fonts?

All of the fonts are free for commercial use, so they can be used in both web and print projects. Additionally, all of the fonts are updated automatically, so there’s no need to worry about keeping things updated manually. Once installed on your site, there’s nothing more to do. As previously mentioned, there are tons of options with over 1450 font families. Lastly, Google fonts offers multi-language support, so if your site has more than one language installed, you’re good to go.

With so many options available, it can be a bit overwhelming to know which fonts to choose for your website. Thankfully, we’re going to help you determine the most popular and trending font families for you to use on your website. Let’s get started.

Roboto is considered a dual purpose font, and is the most popular Google font available. Geometric in shape, it also has nice curves and is generally considered very easy to read. It has actually been used as the typeface for Google’s Android operating system since 2014.

Open Sans boasts a user-friendly, ultra-readable appearance. It’s great for both headline and body texts. Because of its ease of readability, it is used as the default font in the Divi theme.

With over 30 styles, Monsterrat is quite versatile. It was inspired by artwork seen in the historic Montserrat neighborhood of Buenos Aires during the first half of the 20th century.

Google describes Lato as a “serious but friendly” font. Polish for summer, Lato is a multi-purpose font that is generally easy to read and invokes feelings of summertime playfulness.

Oh and by the way, we use it on our blog.

Poppins is a rounded, widely popular font that is suitable for both heading and body text. Developed in 2014 as an open source font, Poppins is based on the Devanagari and Latin writing systems.

Released as Adobe’s first open source font, Source Sans Pro is suitable for all user interface designs. It is quite versatile and pairs well with other fonts on our list such as Montserrat, Open Sans, and Work Sans.

Thin and elegant, Raleway is a display font typeface well-suited for headings and subheadings. Initially developed in 2012 as a single thin font, it has expanded to include 9 variances.

Noto Sans is quite robust with its 18 font variances. In addition, there are more than 3,700 glyphs available with this incredible typeface. With over 18 variances including multiple weights, widths, and italics, Noto Sans is suitable for just about any design.

Designed specifically for computer screens, Inter is the newest font on our list. Initially released under the name Interface, Inter hit the scene in 2017. It is frequently referred to as a cross between Helvetica and San Fransisco Pro.

Based on the widely popular Roboto, the Slab variation is available in four weights – thin, light, regular, and bold.

As one of the only serif typefaces on our list, Merriweather is playful, yet serious. It features talls letters that are condensed, yet easy to read on all size screens. There is also a Merriweather Sans font available that pairs well with its serif cousin.

Playfair Display exudes old-world style, yet exhibits a modern flair. It’s best suited for headings due to its commanding appearance. When using Playfair Display, consider pairing it with an easily readable sans serif font such as Roboto, Open Sans, Work Sans, or Lato.

Using Google fonts is fast and easy, but there are some things that should be considered to keep your site running smooth and fast. In order to make the most of using these fonts, site optimization is key.

Only Use the Fonts You Need

When considering site speed, you should generally only use two or three font families on your site. Font families consist of all iterations of a font. For example, if you install the Montserrat family on your site, you’re actually installing 8 fonts. Font families contain all instances of a font type, which may include different weights (regular, medium, semi-bold, bold) and transformations including italics.

Use a Typography Plugin

It’s a good idea to use a typography plugin to manage the fonts installed on your website. Some themes such as Divi have typography management built into its framework. Typography plugins can help you manage not only your fonts, but typefaces, icons, drop caps, and more.

When choosing fonts, try to choose fonts that work well together. Additionally, you should pair serif headings with sans serif body text. This is because using two serif fonts together makes your text hard to read. Alternatively, it’s totally acceptable to use two san serif fonts together, or even different weights in the same family. If you’re not sure what font pairings to use, you can use a handy browser extension like Fontpair to make it easier to find what fonts a website is using.

If you choose not to use a typography plugin on your WordPress site, you can host the fonts on your own server. The process is fairly simple to achieve in a few steps.

Once the fonts are downloaded, you’ll need to move them to your project. For this example, we’ll use Mamp to upload them to the Twenty Twenty theme.

When placing the font files into your project, be sure to take note of the file location. You’ll need to add it via CSS in the next few steps. To access the fonts for your theme, navigate to /wp-content/themes/twentytwenty/assets/fonts/. If you are using a different theme, replace twentytwenty with your theme’s name. Drag your downloaded font files (including the folder) into the fonts folder on your WordPress sites.

Next, located the downloaded font and drag it into the assets/font folder of your theme.

Next, we’ll need to add a bit of CSS to the theme’s customizer in order for our font to be recognized. Navigate to Appearance > Customize.

Click Additional CSS in the customizer to open the css input area.

Next, add the following code into the Additional CSS area:

To use your new font, simply reference the font using CSS. You can use the browser inspector tool to apply the font to whichever css class you like. In this example, we want the site title, as well as the page content to use our new font. For this example, input the following CSS:

Similarly to keeping your font families down to a minimum, you should limit the number of font weights you use on your website. If you only plan on using regular, medium, and bold, there’s no good reason to include 18 variations of a font. Calling on Google to deliver extra font weights that aren’t being utilized will only increase the time it takes to load the fonts from Google’s servers.

Divi makes Google fonts available by default. Fonts are available in any module that has text. You have the ability to choose from hundreds of web fonts from the Google font library.

In the Divi theme options, you can choose to enable Google Fonts, along with font subsets.

Thanks to Divi’s font search feature, it’s easy to search for and find any Google font that you wish. Another great feature of Divi is the ability to view recently used fonts at the top for easy access.

You can also enter the Google API key so that Divi stays up to date with the latest versions of fonts, as well as any new ones that are added in the Google font repository.

Picking the right font for your website can be an overwhelming process due to the many hundreds of options available to you. Just remember to pick a font that is easy to read, and looks good with the mood of your design. Pair fonts that compliment each other, and try not to use too many fonts.

What are some of your favorite Google fonts? Let us know in the comments section below.